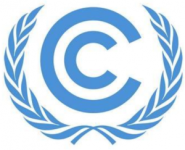 The UNFCCC secretariat (UN Climate Change) is the United Nations entity tasked with supporting the global response to the threat of climate change.  UNFCCC stands for United Nations Framework Convention on Climate Change. The Convention has near universal membership (197 Parties) and is the parent treaty of the 2015 Paris Agreement. The main aim of the Paris Agreement is to keep the global average temperature rise this century as close as possible to 1.5 degrees Celsius above pre-industrial levels. The UNFCCC is also the parent treaty of the 1997 Kyoto Protocol. The ultimate objective of all three agreements under the UNFCCC is to stabilize greenhouse gas concentrations in the atmosphere at a level that will prevent dangerous human interference with the climate system, in a time frame which allows ecosystems to adapt naturally and enables sustainable development.

What does the secretariat do?

Focussing in its early years largely on facilitating the intergovernmental climate change negotiations, the secretariat today supports a complex architecture of bodies that serve to advance the implementation of the Convention, the Kyoto Protocol and the Paris Agreement.

The secretariat provides technical expertise and assists in the analysis and review of climate change information reported by Parties and in the implementation of the Kyoto mechanisms. It also maintains the registry for Nationally Determined Contributions (NDC) established under the Paris Agreement, a key aspect of implementation of the Paris Agreement.

The secretariat organizes and supports between two and four negotiating sessions each year. The largest and most important is the Conference of the Parties, held annually and hosted in different locations around the globe. It is the largest annual United Nations conference, attended on average by around 25,000 participants. In addition to these major conferences, the secretariat organizes annual sessions of the so-called subsidiary bodies as well as a large number of meetings and workshops throughout the year.

In recent years, the secretariat also supports the Marrakech Partnership for Global Climate Action, agreed by governments to signal that successful climate action requires strong support from a wide range of actors, including regions, cities, business, investors and all parts of civil society. At UN Climate Change Conferences, a large number of events demonstrate how non-Party stakeholders are working with governments and the UN system to implement the Paris Agreement. In addition, the secretariat co-organizes regional Climate Weeks. The important events aim to drive forward Paris Agreement implementation at the regional level and to build new climate action partnerships.

Throughout the year, the secretariat strives to keep all stakeholders informed of on the negotiating process and climate action through a variety of communications products, including the website and social media. Around one million people visit the UN Climate Change website every year, and the secretariat’s social media accounts, including on Twitter, Facebook,  Instagram, and LinkedIn have a combined following of around 1.8 million people.