The United Nations Volunteers (UNV) has made it! This month, the UNV Deputy Executive Coordinator, Toily Kurbanov announced that UNV reached full gender parity among their UN Volunteers! What could be a better news to share during the UN week! That I personally ❤️UNV is no hidden secret, UNV is a great organisation and it is a great pleasure to closely support them in their accelerated gender parity journey.

I am proud to share that this year alone, Impactpool has matched 50’000 women to UNV’s volunteer assignments. 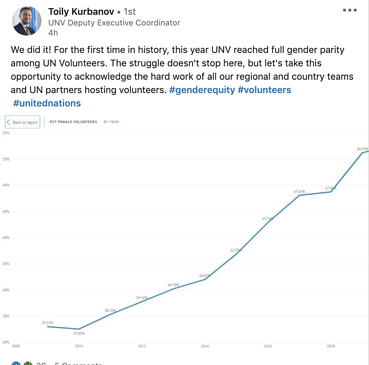 The fact that United Nations Volunteers (UNV) now has reached gender parity is an important step for the whole UN system, in fact, it is a more important step than most know.

In our most recent study  Are Women Paying a Higher Price for a UN career we surveyed UN staff and collected data to better understand the UN career paths. And our study proved that UNV plays a central role in the gender-parity goals of the whole UN system.

As part of our conclusions, we made a few recommendations. We recommended that: 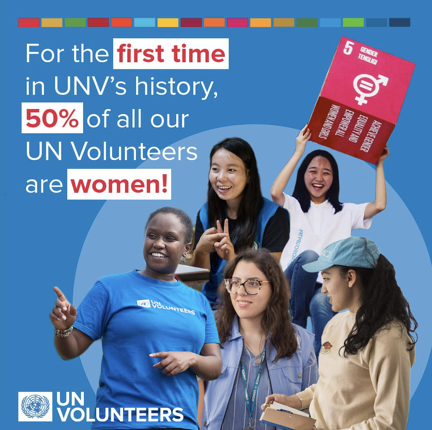 When I assess UNV's success in the gender parity area, I would like to highlight three areas that I believe are instrumental.

Women typically want details about what the international assignment will entail, according to Katie Abouzahr, lead researcher for the May 3 BCG survey report, who noted that "women are less willing to 'wing it.' They want to understand what the assignment looks like before they apply."

UNV’s recruiters are making themselves accessible via different channels and support applicants to better understand different volunteer tracks. An example is an upcoming webinar focusing on assignments in Humanitarian and  Emergency response.

UNV has now taken ownership of gender parity among the UN Volunteers. The next two targets must be Consultancies and Service Contracts.  These three contract types together form UN's most important pipeline of qualified talent. If UN Volunteers, UN consultants and Service Contract holders are  gender equal, we start to build the foundation for gender equality within the whole UN system.

Finally, congratulations UNV! We are happy to be part of your gender equality journey. If you read this and are working in an organisation that struggles to achieve gender-parity. We can help you increase your pipeline of women talents, our popular partnership allows you to get all your jobs automatically posted on Impactpool and matched to our pool of talent. Our partnership starts at $99 per month.